Transcranial Magnetic Stimulation (TMS) is a non-medication, non-systemic, and non-invasive form of treatment for patients with major depressive disorder (MDD) and obsessive compulsive disorder (OCD). Unlike antidepressant medications and electroconvulsive therapy (ECT), TMS is quick, easy, and virtually free of side effects as it does not enter the bloodstream.

TMS works by emitting magnetic pulses to the affected area of the brain—very similar to those experienced during magnetic resonance imaging (MRI). These pulses work to activate the area of the brain that is implicated in the pathophysiology of MDD and OCD. Activating these cells releases neurotransmitters. These are the same neurotransmitters that medications deliver systemically: Serotonin, Norepinephrine, and Dopamine. TMS releases these positive mood chemicals naturally. Additionally, TMS directly affects the neuronal circuitry in the brain, which overall optimizes treatment benefits.

Throughout the duration of the treatment, patients remain awake and alert. They are cared for and monitored by a certified TMS Therapist. Each treatment is approximately 20 minutes long, and the total number of treatments varies by individual. The average course of TMS treatments is roughly 5 times per week for 5 to 6 weeks.

TMS Technology in the World

Over 1 million people have chosen to use TMS to relieve their symptoms. TMS is a safe, effective, and non-invasive alternative to medication for treating MDD and OCD. The FDA cleared TMS for the treatment of MDD in 2008 and OCD in 2018. TMS is also endorsed by The American Psychiatric Association (APA) through their care guidelines for those who have not been adequately treated by an initial course of antidepressant medication.

Who Can Mindful TMS Help?

Are you in the Chicago-area and have failed to find complete relief from MDD and OCD symptoms? You likely can benefit from TMS therapy at one of our Mindful TMS Chicago locations.

There is increasing evidence for the benefit of TMS in treating other off-label indications. Patients with the additional following conditions may benefit from TMS:

Is Mindful TMS for Me?

How Does TMS Therapy Work?

Through the use of a specialized treatment coil, TMS generates highly concentrated magnetic fields that turn on and off very rapidly to activate the appropriate part of the brain. Usually, the treatment coil is applied to the left, front side of the head in the area of the brain called the Dorsolateral Pre-frontal Cortex (DLPFC). This part of the brain is involved in mood regulation.

The unique Mindful Approach we provide only in Chicago integrates Neuronavigation Targeted TMS to individualize the treatment to each patient’s unique anatomical features. 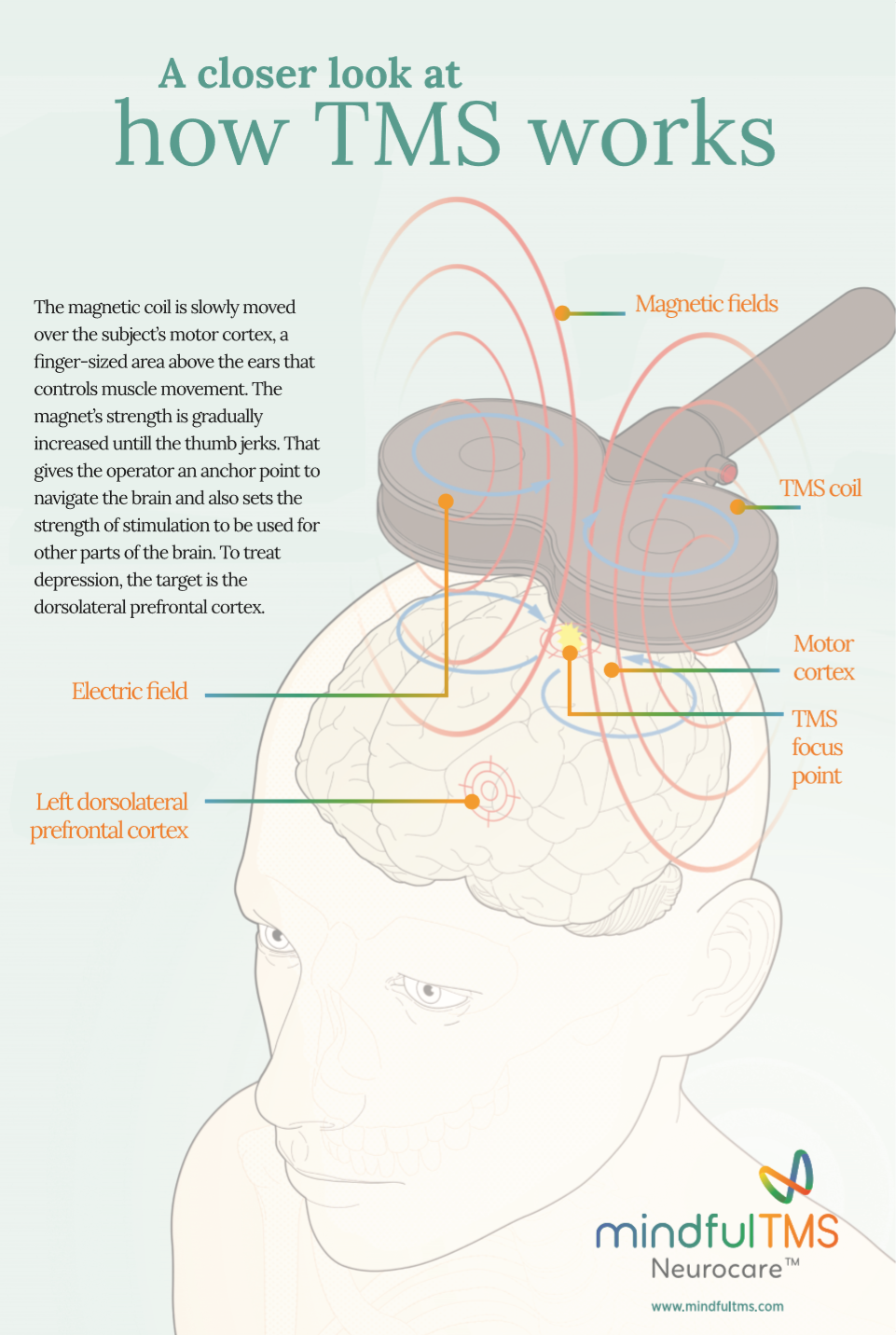